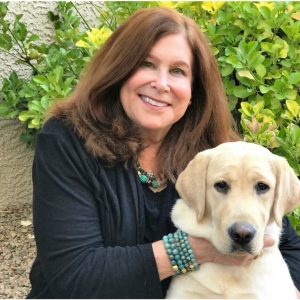 My love of animals began at a very early age. Every Sunday my dad and I would go to Lincoln Park Zoo in Chicago where I was lucky enough to play with a lion cub or have a ride on a Policewoman’s horse and or course pet anything I could.

While others were babysitting, I was dog sitting. I have always believed that animals need a voice and at Mountain Humane we can advocate for them to have a forever home and teach the younger generations how to care for and respect animals.

I was happy to grow up a city girl, but the mountains called and I spent 9 years in Bend, Oregon in the advertising department of The Bulletin Newspaper. We then moved to Seattle and I followed in my husband Bob’s footsteps and became a Financial Advisor with Morgan Stanley for the next 32 years. We built a vacation home out East Fork and after the first summer said: “I am getting a dog and staying”!

Soon after I began volunteering for Mountain Humane where I served as Board President for 4 years and chaired many Dog Days Benefits. This organization has always been near and dear to my heart. I have two “fur children” Ellie and Jesse, both Labs.